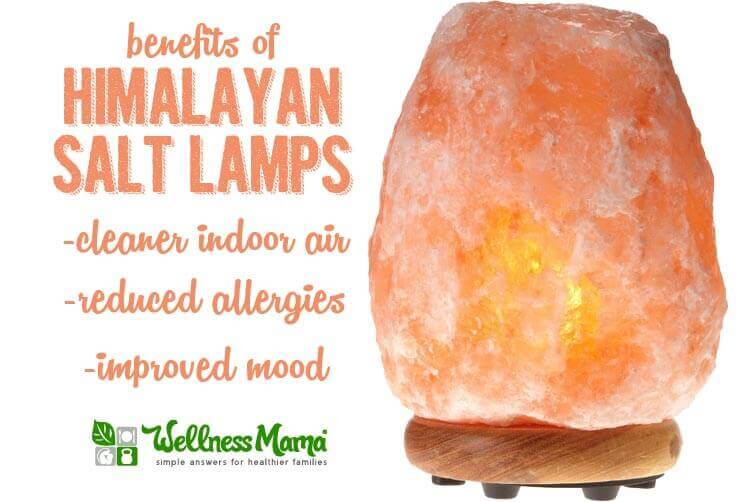 I have several Himalayan Salt Lamps at my house and I’ve talked before about how I use them to help purify indoor air and for their soothing red glow.

We use these lamps so often that I figured they deserved their own post.

It is important to make sure that the lamp is from a pure Himalayan Crystal source and not a cheap imitation made from rock salt.

Himalayan salt lamps are made from pure, food grade, himalayan salt crystals and can even be powdered to use as salt in recipes if needed.

The importance of negative ions…

Salt lamps are natural negative ion generators. At any given time, there are both positive and negative ions in the air. As a flashback to freshman science:

Negative ions occur more often in nature and they are often created by things like lightening storms, sunlight, waterfalls, and ocean waves. This is one of the reasons people often report feeling renewed or refreshed after a storm or at the beach.

Positive ions are often created by electronic devices like computers, TVs, microwaves, and even vacuum cleaners and can often exacerbate problems like allergies, stress and sleep trouble. Negative ions can neutralize positive ions (they bond together) and help cleanse the air.

The unique combination of salt and a light source in salt lamps are what cause the negative ions. Salt is hygroscopic, meaning that it attracts water to its surface and this water evaporates quickly due to the small amount of heat from the light source (this is also why salt lamps tend to sweat and appear wet in humid climates). The negative ions are generated during the evaporation process.

Since things like airborne mold, bacteria, and allergens often carry a positive charge, they can be neutralized by negative ions.

WebMD explains some of the benefits of negative ions in the air:

Generally speaking, negative ions increase the flow of oxygen to the brain; resulting in higher alertness, decreased drowsiness, and more mental energy,” says Pierce J. Howard, PhD, author of The Owners Manual for the Brain: Everyday Applications from Mind Brain Research and director of research at the Center for Applied Cognitive Sciences in Charlotte, N.C.

“They also may protect against germs in the air, resulting in decreased irritation due to inhaling various particles that make you sneeze, cough, or have a throat irritation.”

And for a whopping one in three of us who are sensitive to their effects, negative ions can make us feel like we are walking on air. You are one of them if you feel instantly refreshed the moment you open a window and breathe in fresh, humid air.

It is possible to buy machines that create negative ions, but I’ve found that salt lamps are a less expensive and very effective alternative.

I use salt lamps often in our home, and especially in winter months when it isn’t possible to have the windows open or to spend as much time outside. We now have a solid salt lamp or a basket lamp in each room of our home and I love them for their ambient glow and their negative ions.